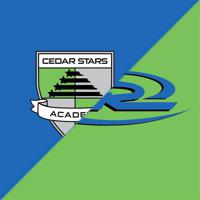 South Hackensack, New Jersey - Cedar Stars Academy and Rush Soccer have announced a historic collaboration that will see the creation of a new USL Premier Development League (PDL) franchise based out of New Jersey.

The team, which will take the field for the 2019 season, will be known as Cedar Stars Rush, solidifying the strong collaboration between both youth soccer programs.

This incredible announcement demonstrates the strength of both organizations, and adds an exciting platform to the Cedar Stars Academy Player Development Pathway for all members of the green and white program.

According to the official PDL website, the league currently features more than 70 franchises in four conferences throughout the United States and Canada, including 18 clubs that are owned and operated by a professional club, or that hold a partnership with a professional club. The PDL has proven to be an important platform for top professionals now playing throughout the world, with more than 70 percent of all MLS selections since 2010 having PDL experience, including 66 selections in the 2018 MLS SuperDraft.

The PDL regular season takes place during the summer. Each team plays a 14-match schedule against their respective divisional opponents. In conferences with three divisions, each division winner, plus the highest-finishing, second-place team in the conference, advances to the playoffs, according to the PDL official website.

“This is a great milestone for Cedar Stars Academy, Rush Soccer and the athletes,” Cedar Stars Academy President George Altirs said. “We are excited for the inaugural season of Cedar Stars Rush, as we are confident it will provide an incredible platform for the players to showcase their talents.”

Rush Soccer is an international sports organization focused on the development of soccer players. Rush Soccer has partnered with over 85 clubs across the globe, and provides comprehensive club development curriculum that benefits more than 32,000 players.

“We are so happy that Cedar Stars and George invited us to join him on this PDL project,” Rush Soccer President and C.E.O Tim Schulz said.  “Being a part of this league will give Rush and Cedar Stars players a special opportunities to reach a higher level. It is very exciting for both clubs.”

As one of the largest soccer clubs in the world, and with an ever-expanding global footprint, Rush Soccer is creating a brand of soccer unavailable anywhere else in the country. The organization’s extensive network of professional coaches and technical staff are dedicated to the betterment of soccer in the United States, and developing a better quality of soccer player within the Rush system.

Leading up to the start of the inaugural season, Cedar Stars Academy and Rush Soccer will continue to release details to their membership through social media to add to their support of and interest in the club.

Upcoming information will include the official logo, home field location, and roster and staff announcements, giving families something to look forward to as they begin supporting Cedar Stars Rush for the 2019 campaign.