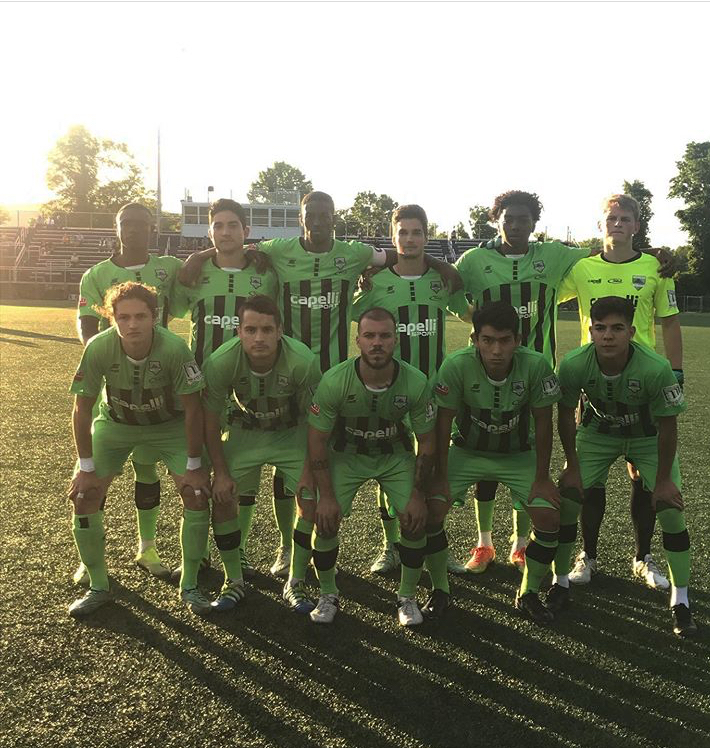 From the opening kick off, both teams challenged each other with runs into the attacking half with Lehigh Valley United getting the game’s opening goal in the 11th minute. LVU’s Steven Riad got credited with his first goal of the season as his strike from the top of the box deflected off a Cedar Stars Rush defender and skipped past keeper Sean Murray.

Late in the first half Ernest Mitchell earned a penalty kick for Cedar Stars Rush. John Antunes stepped up to take the penalty, driving it low and just to the left of the post, keeping LVU’s lead intact heading into the break.

The second half began much like the first, with equal opportunities for both teams, the best being a slight break for Cedar Stars Rush forward Michael Crentsil. Crentsil beat the defender down the right side and took a shot headed towards the far post that was just stopped by LVU’s keeper Joseph Valeriano.

In the 72nd minute, LVU doubled its lead on a goal from substitute AJ Bishop. Eddy Enowbi flew down the right wing and played a cross just past the outstretched arms of Murray that Bishop deposited into the empty goal.

For the final 15 minutes of the match Cedar Stars Rush threw everything they had at LVU, but were unable to convert. The best chance was by midfielder Jack Casey who had a shot cleared off the goal line by the LVU defense following a corner, one of six for Cedar Stars Rush in the 2nd half.

Joseph Valeriano had an answer for every Cedar Stars Rush chance, on his way to an 11 save clean sheet. Cedar Stars Rush attempted 20 shots for the match and dominated possession. They will look to find the score sheet and three points next Saturday June 15th when they travel to Evergreen FC in Virginia.