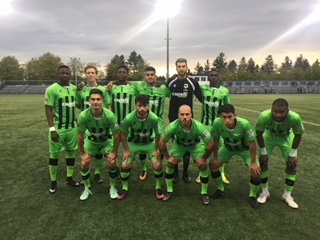 Hempstead, NY (May 11, 2019) - Cedar Stars Rush, the newest member of the USL League Two’s Mid Atlantic Division, opened their inaugural season on the road against the Long Island Rough Riders Saturday night. The Rough Riders welcomed Cedar Stars Rush to the league with a hard fought 2-0 defeat, on an evening that didn’t feature many chances for either team.

Most of the first half was a feeling out period with no notable scoring opportunities. In the 19th minute though, Manuel Ferriol took on a long range strike that managed to bounce by Cedar Stars Rush keeper Aleksandar Gogic for the game’s opening tally. Cedar Stars Rush would allow a second shot in the half that was saved by Gogic. They weren’t able to create any chances for themselves and went into the break down 1-0.

The second half started with Cedar Stars Rush enjoying more possession and starting to create more openings in the midfield. Ultimately, the team couldn’t put together any quality chances in the final third and found themselves down 2-0 in the 59th minute when Rough Riders’ Matthew Sloan’s strike took an unfortunate deflection off center back Andy Martinez (Monmouth) and into the net. Cedar Stars Rush managed to put pressure on the Rough Riders for the remainder of the game but again, couldn’t find a way to create a scoring opportunity, eventually falling 2-0.

Cedar Stars Rush season opener may have come with an undesirable result, but the team showed great resilience and took a big step forward in their development as a unit. They will look to bounce back Tuesday night when they travel to Brooklyn to take on FA Euro at 8:30 PM.